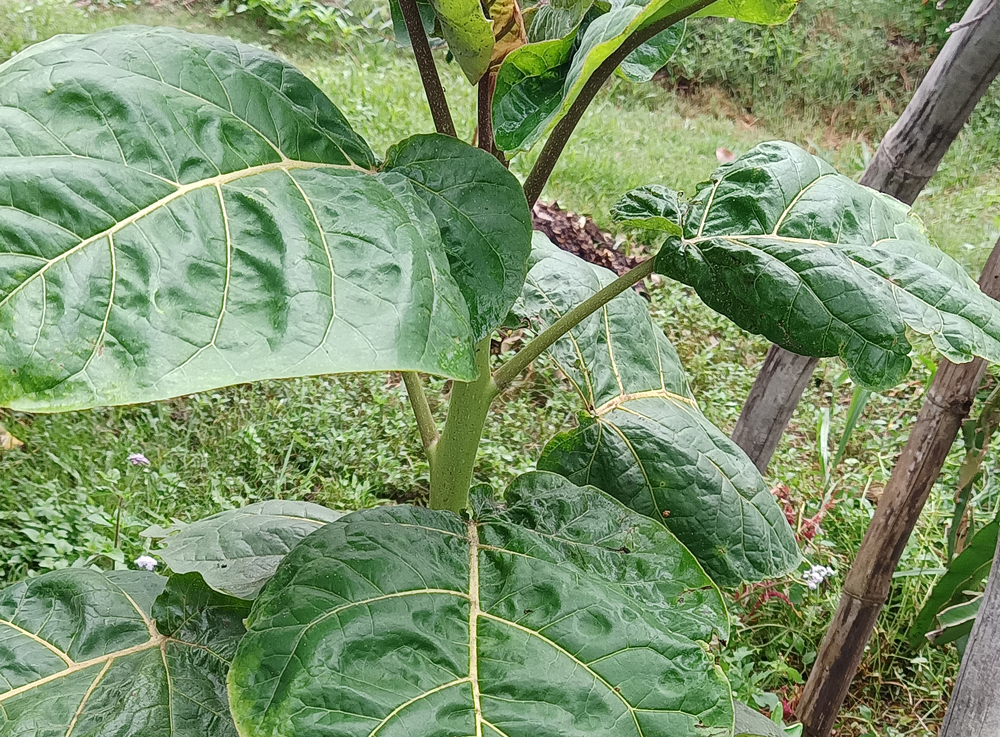 Solanum betaceum also known as tree tomato or tamarillo is a fruit which has a similar appearance to a tomato. Fruit is egg shaped bearing yellow to orange.

Consume the fruit by scooping out the fresh. Flesh could be lightly sugared and cooled which could be used for breakfast.

Puree tamarillos and raw sugar in a blender, then add to cabbage. 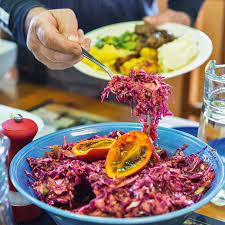 Tamarillo provides a great amount of dietary fibre, protein, minerals and vitamins. It has a high content of carotenoid pigments such as β-carotene, ζ-carotene, β-cryptoxanthin, zeaxanthin and lutein.

Solanum betaceum also known as tree tomato or tamarillo is a fruit which has a similar appearance to a tomato. There is a crimson-red variety and a yellow-orange variety with most people being familiar with the Crimson-red variety. The fruit is egg shaped bearing yellow to orange flesh and black seeds that is surrounded by purple gelatin. The red colour in the tamarillo is due to the pigment named anthocyanins and the yellow colour is from carotenoids pigment.

The tamarillo tree often has a short life-span of 3 to 4 years as the roots are susceptible to fungi and nematodes. The plant prefers a subtropical climate with 600 to 4000 millimetres of rainfall and annual temperatures of between 15 and 20°C. It doesn't tolerate drought stress or frost but it does well in a deep, light and fertile soil. The tree is shallow rooted and grows up to the height of 5 metres. Leaves are large, soft, floppy and heart shaped measuring 15 to 25cm long with a somewhat unpleasant smell. Flowers are bell-shaped, light blue, pink and white growing in clusters from the ends of branches and appear in spring and through summer. Flowers are replaced by orange, yellow, red or purple fruit which is egg-shaped with pointed ends and the size of a large egg. Seeds are flat, thin and hard.

The name tamarillo comes from a competition to name the plant in New Zealand in 1967. Later, tamarillo became recognized as a tropical fruit which is grown in tropical climates. Tamarillo originated from South America, Peru, Ecuador and Chile. Fruit typically appears from May to June but can be as late as September in Melbourne. Fruit is cultivated in Hawaii where the plant often survives until it is 15 years old. After flowering, fruit requires 25 weeks to reach maturity. Today, New Zealand is the highest producer of tamarillo fruit worldwide.

Tamarillo is native to the Andes of Peru, Ecuador, Chile, Bolivia and Colombia. Today it is cultivated in small orchards and gardens and considered to be a popular fruit of these regions. It is also cultivated in subtropical areas of the world such as South Africa, Rwanda, United States, China, Hong Kong, New Zealand and Australia. Around 1996, the first internationally marketed crop was produced in Australia with exotic fruit enthusiasts increasingly growing the fruit from the mid-1970s. About 2000 tons are produced in New Zealand on 200 hectares of land and is exported to Japan, United States and Europe. The existing marketing channels which were developed for kiwifruit are used for exporting them. Tamarillo is grown successfully at higher elevations of the Philippines, Malaysia and in Puerto Rico.

In New Zealand, the tamarillo is known as tree tomato. The new name was chosen by the New Zealand Tree Tomato Promotions Council to distinguish it from an ordinary garden tomato and increase its appeal to consumers.

The tamarillo is a fast growing evergreen tree which grows up to a height of 5 metres. The life expectancy of the plant is about 12 years but it reaches its peak production after four years. The trees are shallow rooted with a single upright trunk and lateral branches. The lateral branches bear the flowers and fruit. Leaves are simple and large, and possess a strong and pungent smell. Flowers are pink to white and usually form in 10 to 50 clusters. A cluster produces one to six fruits. The flowers are self-fertile and don't need cross pollination to bear fruit and are very popular with insects. It is not drought tolerant and can be damaged by strong winds.

The plant bears egg-shaped fruit which measures about 4 to 10 centimeters long. The color of the fruit differs from yellow and orange to red and purple. It may have dark and longitudinal stripes. Yellow or orange fruit are typically sweeter, milder and smaller in size.

1/2 cup raw sugar (depending on sweetness of tamarillos)

Puree tamarillos and raw sugar in a blender, then add to cabbage.

To make the dressing, place all the ingredients into a jar, season with salt and pepper, then shake and pour over the red cabbage mixture.

Tamarillo includes vitamins such as Vitamin B6, Vitamin C and Vitamin E. Vitamin A and Vitamin C are very good antioxidants. It also contains phytonutrients such as anthocyanins, phenolics, flavonoids and carotenoid. The fruit colour varies according to the presence of phytochemicals. The red variety provides more anthocyanins and the yellow variety has a higher carotenoid content. Tamarillo also has malic acid and citric acid which give it the acidic tangy flavor.

Oxidative stress and free radicals are the main causes for diseases. Tamarillo has phytonutrients that offer antioxidant activity and lowers the chances of degenerative diseases such as cancer, cataracts, Parkinson’s disease, heart disease, diabetes and Alzheimer’s disease. Antioxidant properties are from Vitamin E, Vitamin C, Vitamin A and other phytonutrients. Antioxidants are found in abundant sources in the peel as well as the flesh. Studies shows that the peel has a greater health benefit due to the addition of flavonoids and phenols.

Tamarillos are beneficial for maintaining eyesight due to the Vitamin A content along with tomatoes which are also known for improving vision and eye health. It moistens eye membranes and acts as a barrier against viruses and bacteria. It lowers the chances of eye infections and has various nutrients which prevent oxidative stress and degenerative eye disorders including macular degeneration and cataracts.

Potassium is found in ample amounts in the tamarillo which assist in controlling heart rate as well as blood pressure. It balances the harmful effects of sodium on the heart. It also provides magnesium as well as other minerals that are essential for proper functioning of the cardiovascular system. Tamarillo has a high content of dietary fibre which assists in inhibition of the absorption of bad cholesterol. The antioxidant activity reduces heart oxidative stress and lowers the chances of heart stroke and other cardiac problems.

Citric acid helps to avoid the growth and development of kidney stones. It provides protective benefits with the excretion of excess calcium as well as uric acid from the body.  The presence of citric acid in the tamarillo causes the acidic flavor. Adding tamarillo to the diet may lower the chances of kidney stones with further scientific evidence required.

Tamarillo is rich in nutrients which lowers the chances of cancer with its antioxidant properties. Anthocyanins possess anti-cancer properties. Studies shows that lycopene inhibits the growth of cancer cells. As it is an antioxidant food, the consumption of tamarillos protects body cells from turning cancerous and from oxidative stress.

Tamarillo provides Vitamin E, Vitamin C and Vitamin A which contribute to building and maintaining your skin. A daily intake of tamarillo helps prevents aging of the skin due to UV light and pollution. Tamarillo extracts are used in various skin formulations for its antioxidant properties and benefits to the skin. Phenols, anthocyanins and flavonoids protect the skin from oxidative stress. Like the tomato, the tamarillo can be used for various skin problems. Blend two teaspoons of oatmeal, one tamarillo and one lemon juice. Apply it to the face and let it remain for 15 to 20 minutes. Then rinse this mask off with lukewarm water.

Scientific studies show that the tamarillo is beneficial for diabetic people. Tamarillo has chlorogenic acid which helps to lower blood sugar in Type II diabetes. Antioxidant activities also help to lower oxidative stress on body organs such as the liver and pancreas that can impact on diabetes.

Tamarillos possess a wide range of antimicrobial activity due to the protein that inhibits the action of the enzyme invertase. Its protective action was found in studies over various plant pathogens. This antioxidant activity assists in preventing infection in humans.