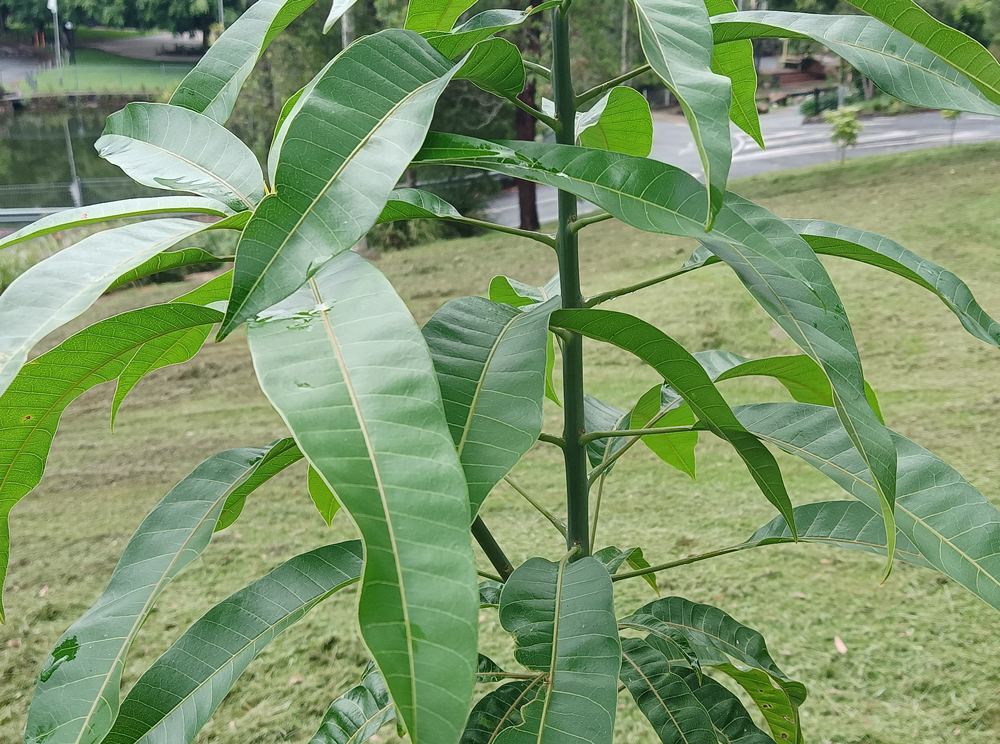 Use the decoction made from leaves by adding honey for loss of voice. Young leaf infusion is used for chronic diseases of lungs, coughs and asthma. 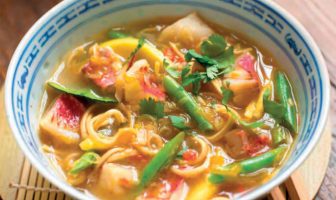 Mangoes have low content of cholesterol, saturated fat and sodium. It is a great source of Vitamin B6, dietary fiber, Vitamin C and Vitamin A. High content of minerals such as copper, magnesium and potassium, astragalin, beta carotene and quercetin could be found in mangoes.

Mangoes are an evergreen tree which measures 10 to 30 m tall and trunk circumference of above 12 feet with dense crown, symmetrical and rounded canopy which ranges from low and dense to upright and open trunk and dense taproot. It has glabrous and brown branchlets. Leaves are alternate which borne in petioles of 2 to 6 cm long and is shallowly grooved apically as well as inflated basally. It has simple and variable lamina in lanceolate to ovate or oblong to oblong lanceolate measuring 12 to 45 cm long by 3 to 12 cm wide. It has acute to long acuminate apex, cuneate to obtuse base with 18 to 30 pairs of lateral veins and midrib distinct on both sides. Leaves are light green when young which turns into deep green when mature. It bears narrowly to broadly conical inflorescences, pseudoterminal, 20 to 45 cm long, glabrous to tomentose pilose having lanceolate, pubescent bracts which bears hundreds of fragrant and subsessile to shortly pedicellate male and hermaphrodite flowers. The small hermaphrodite flowers are 5 to 10 mm having four to five ovate lanceolate, four to five oblong, lanceolate and yellowish petals. Fruit is a fleshy yellow to orange drupe which is smooth to firbrous mesocarp which is surrounded by a leathery laterally compressed by endocarp which contains single seed. Fruit are globose to ovate, obovate to oblong to elongate in shape. It has green to pale green and yellow skin. When ripe it have blushes of orange, pink, purple and red which depends on variety.

Mango is regarded to be one of the best tropical fruits. This species was domesticated in India around 2000 BC. From India, the species was brought around 400 to 500 BCE to East Asia, in 15th century to Philippines and in 16th century to Africa and Brazil by Portuguese. In 1753, the species was described by Linnaeus for science. It is the national fruit of Pakistan, India and Philippines. The tree is regarded as the national tree of Bangladesh. India and Pakistan is considered to be the main suppliers of Western Asia & Thailand and Philippines are the main suppliers of Western Asia. Pharmacological activities such as antitumor, antioxidant, antiallergic, immunomodulatory, antidiabetic, anti-inflammatory, antiviral, antiulcer, antibacterial, antifungal and antiparasitic properties are found in Mangifera indica L. It contains indicol, pentacyclic terpene, sugars, β-sitosterol and glycosidic substance. Leaves possess volatile oil which contains ethyl, methyl, isobutyl and amyl alcohols and ethyl acetate.

Mango tree is evergreen grows from 10 to 40 m high with symmetrical and rounded canopy which ranges from low and dense to upright and open. It has dark grey to brown to black bark which is smooth and superficially cracked. Exudate of live bark is transparent, drying brown, dark yellowish brown which consists of resin combined with gum. Bark consists of 15% gum and 78% resin with tannic acid. The twigs are smooth, glabrous, apically angular, dark green and glossy.

Tree has long and unbranched taproot which measures up to 6-8 m and dense mass of superficial feeder root that develop at trunk base or slightly deeper. It produces anchor roots and feeder roots sometimes develop above water table. Fibrous root system broader away from drip line.

Leaves are simple, alternately arranged, exstipulate and measures 15 to 45 cm long. It has 1 to 12 cm long petioles which are swollen at base. It is grooved on upper side. Leaves are arranged closely at tips which appear to be whorled. Leaves are oval to lanceolate, oblong, lanceolate, ovate, linear to oblong, roundish to oblong and obovate to lanceolate. An apex is acuminate to nearly round. The entire margin is slightly wavy, undulated, folded or rarely twisted. An upper surface is dark green and shiny and lower surface is glabrous light green. The leaves are flaccid, pendulous while young and appear in flushes. Young leaves are tan-red, yellow to brown and pink in color. The color later on chances from tan-red to green and pass through various shades becomes dark green when mature.

The tree bears an inflorescence which is narrowly to broadly conical panicle measuring 45 cm long that depends on cultivar and environmental conditions. It is bracteates or ebracteate. Bract is elliptical, concave and leafy. The panicle is yellowish to green or light green having crimson patches. An inflorescence is pubescent which might be glabrous sometimes. The panicle bears about 500 to 600 flowers in which 1 to 70% are bisexual and remaining are male depending on cultivar and temperature during development.

The male and hermaphrodite flowers are formed in same panicle which is usually larger. Male and hermaphrodite flowers measures about 6 to 8 mm diameter. It is rarely pedicellate, subsessile and possesses sweet smell. The short pedicles are articulate having panicle branch of same diameter. Calyx is fivepartite and lobes are concave and ovate to oblong. Corolla has five pale yellow petals and three to five ridges on ventral side. It bears pink anther which turns to purple at the time of shedding. It has sessile and one celled ovary which is oblique and is slightly compressed. An ovule is pendulous and antrapous showing one sided growth.

Fruit is a fleshy drupe which is more or less compressed and varies in shape, size, color, flavor and taste. The main characteristic feature of this fruit is the formation of small conical projection that develops laterally at proximal end of fruit which is called beak. Above the beak, a wide sinus is present. A pistillate area of fruit is found near the base of beak called nak. The fruit is rounded to ovate-oblong or longish and its length varies from 2.5 to 30 cm in contrasting varieties. The base is elevated or depressed or intermediate. The skin color shows different mixtures of yellow, green and red shades. Skin might be rough or smooth.

This is a complete meal in a bowl. Raw mangoes add bite to a citrusy broth flecked with fiery red chiles. Raw mangoes are available in many Asian markets.

Mangoes are a great source of dietary fiber, minerals, vitamins and poly-phenolic flavonoid antioxidants. It also possesses an adequate amount of Vitamin A and potassium. Vitamin A assist in bone growth, vision, healthy mucous membranes and skin. The serving size of 100 grams of mangoes provides 156 mg of potassium and 2 mg of sodium. Potassium is essential to normalize blood pressure and heart rate. It controls level of homocystiene in blood. Bark, leaves, stem and roots contain mangiferin which prevents harmful effects of radiation. Bark possesses anti-inflammatory, antioxidant and immunomodulatory properties.

Mangoes are loaded with vitamins which promotes overall health. It is rich in magnesium and potassium which helps to cure high blood pressure. It possesses calcium, selenium, phosphorus and iron. This fruit is rich in Vitamin B6, riboflavin, Vitamin C, Vitamin A, Vitamin K, Vitamin E, folate, niacin and pantothenic acid. It assists to prevent host of diseases which arises from deficiency of minerals and vitamins. Vitamin E promotes sex life by enhancing the activity of sex hormones. The present study showed multifaceted activities of mango and its phytochemicals which helps to counteract pro-inflammatory molecules and health problems such as cardiovascular diseases, cancer, aging and neurodegenerative disorders. (1)

The methanol extract of Mangifera indica L. showed cholesterol lowering activity when provided 90 mg/kg for 6 weeks treatment and lowered in plasma triglycerides which was also examined on the treatment with extract. 3β-taraxerol, mangiferin, and iriflophenone-3-C-β-glucoside was found in leaf methanol extract in 0.49% w/w, 4.6% w/w and 2.37% w/w respectively. Methanol extract of Mangifera indica leaf is considered to be safe after oral examination of single dose of 5000 mg/kg body weight to female albino Wistar rat. (2)

The extract of Mangifera indica found to be cytoxic to both estrogen negative and positive breast cancer cell lines in comparison to normal breast cells. An antioxidant bioactives provide synergistic effects that contribute to cytotoxic effects of extract. Mangifera indica extract possess anticancer activities against breast cancer cells. The therapeutic potential is tremendous and could be used as an alternative for various therapy used currently to treat breast cancer. Yet it is required to identify actual components which are responsible for cytotoxicity and isolate them and to study its effect in vivo to make sure its effectiveness or any side effects. This extract could play a vital role in future studies for managing breast cancer. (3)

The study was conducted to evaluate cardio protective effect of alcoholic leaf extract of mangoes against cardiac stress which is caused by doxorubicin (DOX). It is concluded that DOX induced cardiac stress could be prevented with the use of alcoholic extract of mango leaves to higher extent. No preset guidelines are there to prevent cardiotoxicity caused due to anticancer agents. It is helpful for the patients of chemotherapy associated complications of heart. The studies could be further conducted or designed clinically. (5)

Mangoes are packed with ample amounts of Vitamin B6 that is essential to maintain and improve brain function. It supports amalgamation of vital neurotransmitters which helps to determine mood and modify sleeping patterns. It naturally provides meaningful amounts of Vitamin when included in diet. It results in healthy brain with effective functioning of nerves. It is better to avoid medicinal supplements that provide various side effects. Mangoes have glutamine acid content that promotes memory and concentration.

Mangoes are useful to maintain skin health. It helps to provide a healthy glow to face and also lightens the skin color. This fruit helps to enhance the beauty if consumed regularly. It helps to treat acne by opening the clogged pores on skin. When the pores are opened the formation of acne will stop eventually. The most effective way to erase acne is to unclog the pores of skin. Besides its consumptions, apply the pulp on the skin for about 10 minutes and then wash it.