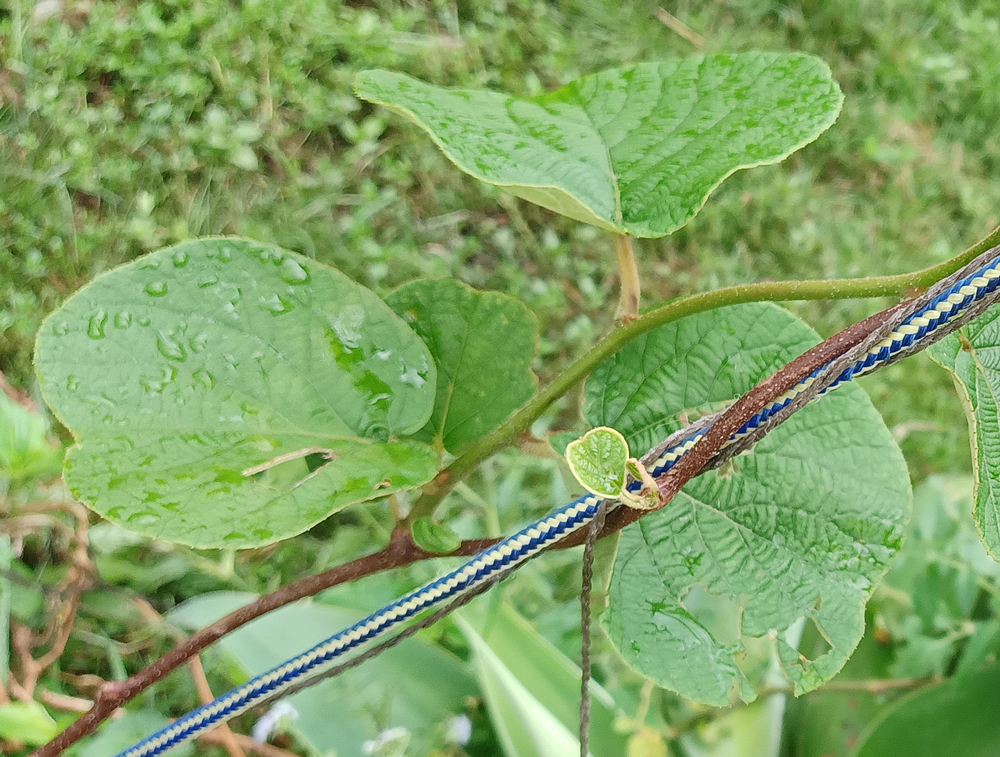 Kiwifruit belongs to Actinidia genus which has 5 to 6 dozen species of climbers in Actinidiaceae family. It is well known for its edible fruits they produce but

Leaves and vines are used for rheumatoid arthralgia, kidney stones, oesophagus and liver cancer. In folk medicine, it is used as an aid for adult diseases such as anti-pyorrhoea, potent antihepatotoxic and gingival inflammation. 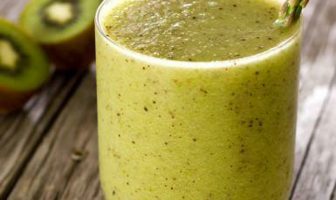 Kiwi fruit has high nutritional content which provides about 273% of daily recommended value of Vitamin C which enhances immune system and prevents colds and flu. It has impressive amounts of Vitamin K that assist in coagulation of blood or blood clot.

Kiwifruit is a dioecious and woody vine which grows upto 10 m in length. The vine has white to cream colored flowers which gives way to oval fruit. Flowers are pollinated by insects and blooms during summer. Fruits are egg shaped measuring 55 to 70 mm long and have green flesh which is covered with light brown skin. The ripe fruits are very juicy having refreshing acid flavor also characterized as the mixture of pineapple and strawberry. It is grown in warm and temperate climates and is tolerable to wide range of conditions.

Kiwi fruit being inherent to Taiwan and China, it is cultivated widely in the world. California, New Zealand and Italy are the major producers of Kiwi fruit and meaningful harvest is obtained from Israel, France, Spain and other countries.  This fruit was brought during early 20th century to New Zealand by the missionaries. Due to its growing appreciation, it was named as Chinese Gooseberries. It was later imported to United States where it was well-known. After numerous rechristening, the fruit was renamed as kiwi in the honor of national bird of New Zealand.

Kiwifruit is categorized as one of the exotic fruits which are featured as a topping in fruit bowls, pavolvas, smoothies and salads. Kiwfruits are used to improve cardiovascular health, prevent strokes, lower blood pressure and improve skin health. It supports in treating insomnia, cancer, diabetes and macular degeneration. As kiwis are rich in flavonoids, it is helpful at the time of pregnancy and improve iron absorption in the body. Its anti-microbial properties defend against pathogens and strengthen immunity.

An agent collected the specimens of plant in 1847 for the Royal Horticultural Society of London. In early 20th century, the cultivation got spread from China when the seeds were introduced by Isabel Fraser to New Zealand. In 1906, the seeds were planted by Alexander Allison, a Wanganui nurseryman and the fruiting took place in 1910.

The taste of the fruit resembles the flavor of gooseberry so named it Chinese gooseberry but as it belongs to genus Actinidia, it is no related to Grossulariaceae family. In 1924, Hayward Wright developed Actinidia deliciosa ‘Hayward’ a familiar cultivar in Avondale, New Zealand. It became widely grown cultivar in the world. Initially, Chinese gooseberry was grown in domestic gardens and in 1940s, the commercial planting began. Turners and Growers named it as Kiwifruit in 1959 after New Zealand’s national bird, the Kiwi (brown and furry).

As of 2006, Italy became the leading producer of Kiwifruit in the world followed by Chile, New Zealand, Japan, Greece, France and United States. It is still being produced in China (birthplace). In China, it is grown in mountainous area upsteam of River Yangtze. It is also cultivated in Sichuan and other areas of China.

In 2010 & 2011, the vines of Kiwifruit in New Zealand, France and Italy suffered by Pseudomonas syringae pv.actinidiae, a bacterial disease with New Zealand attacks by virulent strain PSA-V. This diseae was firstly noticed in 1980s in Japan and afterwards in in Northern Italy in 1992 and then in South Korea.

Kiwifruit is a vigorous, woody and dioecious vine with large, whitish to brown and lamellate pith. It has strigose and brownish petioles and young branchlets. It bears alternate leaves which are subrobicular or obovate orbicular and measures about 6-17 × 7-15 cm. The unisexual flowers have orange yellow on brown villous pedicels. It usually has five sepals and petals. Sepals are broadly ovate to oblong-ovate in shape. Petals are broadly obovate, have shortly clawed base with rounded apex. An ovoid fruit measures 5 to 6 cm and is densely hispid when mature. Fruit have firm, juicy flesh in bright green color. The flesh tastes sweet to subacid. The center of the fruit contains various tiny seeds in purplish to black color.

Leaves are alternate, deciduous and have long petioles. It is oval to nearly circular with cordate base. Leaves measures 7.5-12.5 cm long. Leaves while young are laminate with red hairs. When matured leaves are dark green and hairless on upper surface. The beneath surface have prominent and light colored veins.

Fragrant flowers are unisexual or dioecious which borne singly in leaf axils. It has five to six petals. At first, they are white in color which changes to buff yellow. Flowers measures 2.5-5 cm broad.

The oblong fruits measures 6.25 cm long. Fruits have russet-brown skin which is obtusely covered with stiff, short and brown hairs. It has firm flesh which is juicy, luscious and glistening. Flesh is bright green or yellow in color. It has subacid to quite acid flavor which resembles strawberry or gooseberry.

It possess ample amounts of Vitamin A which is great for bone, skin and development of tooth, prevent macular degeneration and also protects vision. Copper is helpful for the children and supports in healthy development of infants. With high content of Vitamin B6, it supports immunity and folate prevents the risks of heart disease, birth defects and cancer. Antioxidants found in Kiwifruits helps to neutralize free radicals that damages cells and causes inflammation and cancer. The moderate consumption of Kiwifruit helps to gain maximum health benefits which are discussed below:

Kiwi fruit contains 154% of Vitamin C in 100 grams which provides more Vitamin C in comparison to oranges and lemons. Being a powerful antioxidant, Vitamin C helps to eradicate free radicals that cause cancer and inflammation. It strengthens immune system to counteract harmful pathogens. Vitamin C and antioxidant compounds help to modulate immune system. In addition, it contains Vitamin E that promotes immunity and also helps to lower cholesterol. An intake of Kiwifruit helps to eliminate inflammation, stress and incursion caused by viruses and bacteria. Consume Kiwifruit to counteract seasonal infections and other health problems related to anti-fungal and anti-microbial action. It lowers cold and flu symptoms and other respiratory tract infections.

Studies shows that Kiwi fruit possess many useful compounds such as serotonin and antioxidants that is helpful for treating sleep ailments. Consume two kiwifruits just one hour before bedtime that helps to induce sleep. It has good serotonin content that promotes better sleep. The consumption of kiwifruit promotes onset of sleep and lowers waking time after onset and provide relief from sleep disturbances. Kiwifruit has flavonoids such as quercetin, narigenin, catechin, rutin and epicatechin that adjust sleep inducing receptors and is regarded an effectual plant based sedative agent. Kiwi peel is an effective ingredient for developing natural sleep aids.

Kiwifruit is packed with dietary fiber that prevents numerous diseases. The study shows that high intake of foods rich in fiber lowers the chances of coronary heart disease and cardiovascular disease. High content of fiber helps to control metabolic markers such as cholesterol, blood pressure and blood sugar. It promotes weight loss and is also helpful for diabetic patients. Being a great source of dietary fiber, it promotes digestive health and eliminates toxins from color that prevents the chances of colon cancer. It prevents the risk of gastrointestinal problems and constipation. Raw kiwi contains a protein dissoliving enzyme known as actinidain that supports digestion which is similar to bromelain in pineapple and papain in papaya. The fruit has laxative properties that adds bulk to stool and makes it soft. It has polysaccharides which assist inaverting adhesion of eneropathogens and vitalize probiotic bacteria in colon. The extracts of Kiwi stimulate growth of lactic acid and hinder the development of Escherichia Coli bacteria and also aid digestive health.

Kiwifruit helps to counteract effects of acidic foods which we consume. A people with healthy body keeps you active, full of energy, has good pH balance and youthful skin. Kiwifruit has vitamins C and E that acts as an antioxidant and prevents degradation of skin. Apply few slices of Kiwifruit for good results. Moreover, kiwifruits also consume carotenoids, omega 3 fatty acids and polyphenols that promotes heart health. It assists to maintain smooth and healthy skin with a significant contribution in collagen synthesis process. Vitamin C in it makes the skin firm and speeds up healing of abrasions and cuts.

Kiwifruit helps to lower the side effects such as bleeding and inflammation in intestinal tract. The study shows that consumption of three kiwifruit a day for about 28 days helps to lower triglycerides by 15% and blood clotting by 18%. The daily intake of Kiwi fruit prevents plaque buildup and deposits in arterial walls by preventing cardiovascular problems. It has high content of protective polyphenols along with Vitamin E, Vitamin C and potassium that effectively maintain cardiovascular health. The study has shown that Kiwifruit has inhibitory activities that support lowering of triglycerides in blood. It lowers the platelet aggression response or the chances of blood clotting. The fruit have fibrinolytic effect on blood vessels that prevents the chances of atherosclerosis and thromboembolic.

Kiwifruit helps to promote vision health as it possess high content of zeaxanthin and lutein which are the natural chemicals that are present in human eye. Lutein helps to prevent macular degeneration and development of cataracts and glaucoma by filtering out damaging blue light. Zeaxanthin along with lutein contributes to eye health. The study shows that consumption of three kiwi fruits lowers the risk of macular degeneration by 36% which is associated with vision loss in older people.

Kiwifruit are rich in antioxidants that lower the ageing effects in the body. Antioxidants helps to neutralize free radicals that damages cells and hasten degeneration process which results in change in skin elasticity, thickness and firmness. The oil extracted from the seeds of Kiwifruit are used in anti-aging products. The combination of lycopene, Vitamin E, C and other substances counteract free radicals and prevents premature ageing. It lowers the appearances of fine lines and wrinkles. It reduces the effects of ultraviolet radiation on skin and antioxidants helps to rejuvenate skin and prevent early degeneration.