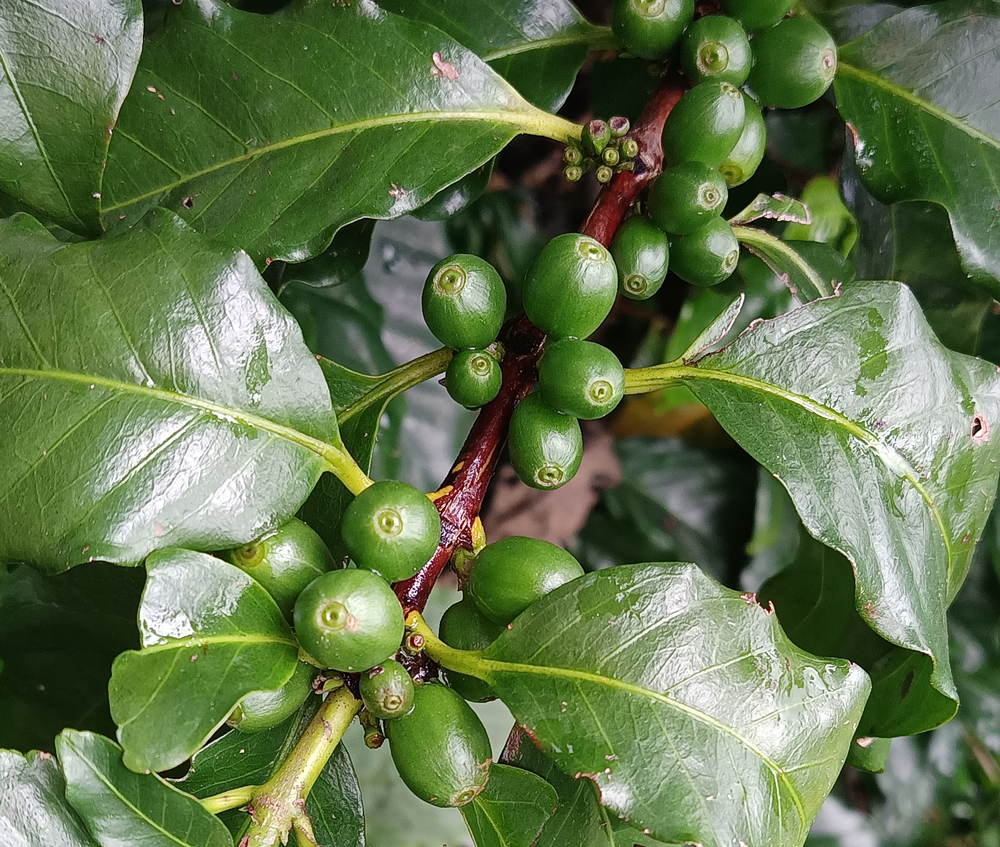 Coffea Canephora, or Coffea robusta, is a coffee plant that is most commonly known to grow Robusta coffee beans. It is a species of coffee belonging to Rubiacea

Seed consist of caffeine, a widely used stimulant that is also used in proprietary painkillers to potentiate the effect of aspirin and Paracetamol. 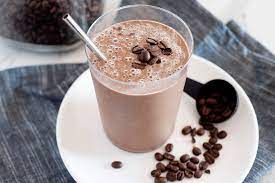 Robusta coffee is a very variable evergreen shrub or small robust tree growing up to 12 meters tall, though usually smaller. It often has a large, umbrella shaped growth habit. The plant is often found growing in open or dense rain-forest, forest margins and to desert areas. The plant prefers a well-drained fertile, neutral to slightly acid soil. It can also succeed in shallow soils in areas of high rainfall, and will stand temporary waterlogging. The plant has a shallow root system and grows as a robust tree.

It can grow in low altitudes, as well as diverse climatic conditions. Farmers love to grow it because grows faster, and is more disease and pest-resistant than Arabica coffee. Canephora beans are associated with producing coffee beans that are very bitter and have a low acidic rate. As a result of their high bitterness level the coffee beans cannot be used in every brew. The canephora beans are primarily used for espresso, traditional instant coffee (Waka uses only 100% Arabica beans), or as a filler for lower-grade ground coffee blends as they produce a strong flavor of coffee.

Inflorescences with cymes 1-3 in each leaf axil, each cyme 3-6-flowered, stalk less to stalked with stalks up to 7 mm. Flower-stalks are up to 2 mm. Sepal cup is hairless. Flowers are white to pink, funnel-shaped. Flower tube is 5-16 mm. Petals is 5-7, spatula-shaped to narrowly elliptic, 8-19 mm, obtuse to round.

The plant flowers irregularly, taking about 10-11 months for cherries to ripen, producing oval shaped beans. Fertile flowers are followed by round berries 1.0-1.2 cm across, smooth when dry and are hairless. Fruits are initially green turning to bright red as they mature. Robusta plant has a greater crop yield than that of Coffea arabica. As it is less susceptible to pests and disease, Robusta needs much less herbicide and pesticide than Arabica.

The Coffea Canephora originated in the northern forests of Ethiopia and now grows indigenously throughout western and central sub-Saharan Africa (Liberia – Tanzania – Angola). Since the original discovery of the Coffea plant, it has naturalized and made its way to other hot places around the world, like Vietnam, Nicaragua, Costa Rica, and the Lesser Antilles.

Some unusual Uses for Coffee

If your fridge is a nightmare of foul odors, place a bowl of fresh, unused coffee grounds inside and leave it for a day or two. The coffee will absorb the odors and you’ll crave a cup whenever you open the door. This odor-killing trick works for practically anything else as well – just place the item in a sealed plastic bag along with an open can of coffee grounds and bye-bye stank.

Pricey cellulite creams almost always have one major ingredient in common: caffeine, which supposedly enhances fat metabolism, reducing the appearance of these fatty pockets under the skin. To make your own coffee cellulite treatment at home, mix warm used coffee grounds with coconut oil and rubs it onto your skin in circular motions for a few minutes before rinsing.

3. Erase smells on your hands

Garlic, salmon, cilantro – there are some things that smell delicious when cooking, but aren’t so pleasant hours later when they linger on your hands. Get rid of them by rubbing a handful of used coffee grounds on your hands and rinsing with warm water.

Coffee is often recommended as a simple, natural treatment to make hair extra-glossy. Brew up an extra-strong pot, let it cool and apply it to your dry, clean hair. Leave it on for at least twenty minutes, then rinse. Keep it up once a week or so for best results.

Natural pigments in coffee make it a great natural dye for fabric, paper, Easter eggs – even your hair. Brush paper with strong brew and let it dry, or soak fabric items in hot coffee. The results won’t be color-fast, and may bleed out onto other items, so it’s best to use this on items that won’t be washed very often if at all. Using coffee as a hair shine treatment, as previously mentioned, may temporarily lend a rich, dark tint to your hair.

Dried, used coffee grounds are the perfect filler for homemade pin cushions. Just wrap them in some scrap cloth, tie it off with a rubber band and place the cloth in an egg cup or other small container. The grounds will keep your pins from rusting, too.

Sprinkle dry, used coffee grounds in problem areas where you notice ants in your home or yard and they might just pick up and leave. To tackle with huge ant mounds, pour an entire pot of brewed coffee right on the mound.

Acid-loving plants will thank you for sprinkling your used coffee grounds around their roots. Azaleas, blueberry shrubs and rhododendrons are just a few of the plants that flourish when treated with coffee thanks to all those nutrients. You can also dilute the leftover coffee in your mug and pour it right into your potted plants.

10. Keep cats out of your garden

To you, that little garden in your yard is a beautiful source of fresh herbs, fruits and vegetables, but to seemingly every cat in a five-mile radius, it’s a giant, irresistible litter box. Sprinkling used coffee grounds on the soil, and cats will want nothing to do with it.

11. Scrub all kinds of surfaces

Mildly abrasive and acidic, coffee grounds are great for scrubbing surfaces like countertops, cooking ranges and refrigerators. Use them alone or mix them with a little dish soap.

Coffee grounds can be used to make an all-natural DIY air freshener like this one at Instructables. Try to use an old ripped pair of pantyhose and spare string to make this an even more eco-friendly project.

Used coffee grounds are an ideal medium to grow many kinds of mushrooms, including oyster mushrooms.

In females, coffee usage considerably reduces all-cause death, unsurprisingly lowering relatively linearly to the relative chance of roughly 0.85 for all those consuming 3 cups each day as opposed to those who ingest no coffee, however the comparable danger then stays nearly exactly the same for approximately 6 cups each day, in accordance with a sizable potential cohort research. In males, these types of health benefits are not as wonderful, in reality with the elevated chance for all those consuming roughly a single serving every second day as opposed to those consuming probably none, yet somehow having a substantial trend in the direction of much less death for individuals who consume a lot more than 2 cups every day as opposed to those who consume none. Outcome was comparable for decaffeinated coffee.

Alzheimer’s disease (AD) is really a gradually intensifying illness of the brain which is described as disability of memory and finally by disruptions in thinking, preparing, language, as well as conception. Numerous researchers think that Alzheimer’s disease is a result of a rise in the development or even buildup of the particular protein (beta-amyloid protein) within the brain which leads to nerve cell death.

The majority of the MCI individuals will establish Alzheimer’s as well as scientists wished to determine whether coffee might be very therapeutic for this particular group of sufferers who were most in danger. Blood was taken at the beginning of the research to determine caffeine amounts within 124 people in between the ages of 65 and 88. The individuals were than noticed for just two to four years to discover the improvement of intellectual disability.

For the MCI sufferers who didn’t produce dementia, coffee was actually the only real supply of caffeine within their diet. The scientists think that this is actually the “First primary proof which caffeine/coffee consumption is assigned to a lower life expectancy chance of dementia or even postponed onset, particularly for people who currently have MCI.”

Within a earlier research coffee was proven to help safeguard young adult Alzheimer’s mice, which may have exactly the same protein as humans which causes Alzheimer’s, from developing further memory disability as more mature adult mice. In accordance with the scientists, coffee might help Alzheimer’s simply by controlling two vital nutrients that produce the irregular protein. Whilst coffee may suffer just like a requirement, particularly when dealing with a lengthy travel to work, now it may be priceless for preserving your memory in the future.

Two of the most prevalent kinds are usually basal cell cancer as well as squamous cell cancer. They often form around the head, face, neck, hands as well as arms. Another kind of cancer of the skin, melanoma, is much more hazardous yet more uncommon.

Ladies who consumed about three cups of coffee each day were 20 % more unlikely to get basal cell carcinoma, the research discovered.

“Given the almost 1 million new cases of BCC identified every year within the United States Of America, every day dietary factors along with even tiny protecting effects might have excellent public health impact,” Dr. Fengju Song, a postdoctoral researcher at Brigham as well as Women’s Hospital and Harvard Medical School, mentioned within a written affirmation. “Our study suggests that coffee usage might be an essential choice to assist in preventing BCC.”

Basal cell carcinoma (BCC) is really a slow-growing type of cancer of the skin which is the reason for 75 % of all skin cancers, in accordance with the American Cancer Society. BCC is particularly prevalent between individuals with light-colored skin, blue or even green eyes, or blonde or red hair.

Scientists examined cancer of the skin rates amongst 73,000 individuals in between 1984-2008 and discovered 23,000 basal cell carcinoma conditions. The scientists then checked out data about how much coffee each individual used.

Coffee-drinking ladies were not the only ones who observed a large risk decline, the research showed. Men that consumed 3 or more cups were 9 % more unlikely to possess BCC, in comparison with individuals who consumed a lot less than single serving of Joe each month.

A lot more coffee the members consumed, the reduced the cancer probability. Consuming the most coffee when compared with various other research individuals was linked with an 18 % basal cell carcinoma risk decrease for ladies along with a 13 % reduction for males. The results were offered in a cancer avoidance meeting in Boston

Before you decide to camp out in front of the company’s coffee maker, specialists warn there are actually good ways to avoid cancer of the skin.